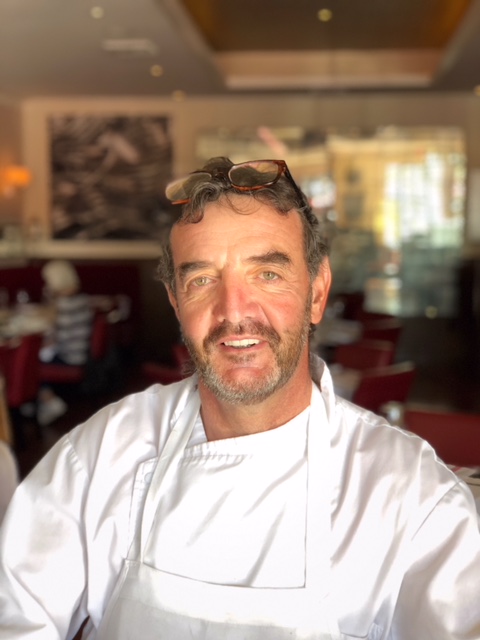 Alain Delahaye has been appointed Chef de Cuisine at Bistro du Marché. Chef Alain has trained in France.in Michelin stars restaurants such as Argi Neder and Café de Paris in Biarritz prior moving to San Diego. His experience includes working with Chef Patrick Ponsaty who was named one of the “Best Hotel Chefs of America” by the James Beard Foundation.

Sylvie: How did you come to a profession in the culinary arts?

Chef Alain: I wanted to travel and I enjoyed cooking. Cooking came with family. I remember my first recipes, when I was a young boy. I used to cook for my grandmother. She had Alzheimer, she was letting herself die. So I was cooking for her and feeding her with creams, things easy to eat.

Q: How old were you?

Q: How did you get into your apprenticeship?

A: When I graduated from school, my uncle, who was a musician and a friend of chef Jean-Pierre Dottax of the hotel restaurant Argi Neder, introduced me to him, and hired me on site for apprenticeship. It was a one star Michelin restaurant located in Ainoha nearby where I am originally from.

At that time, Chef Dottax advised me to get some rest during the months of July and August; due to the high season he was concerned that for my first experience in a professional kitchen I might be dismayed. It was important to him that I take this time off to keep along with the profession I had decided to embrace. I started in September and stayed 2 years in apprenticeship. It was a lot of hours and it was good. This is a place where we transformed seasonal products in rare savors and flavors. This is where I deepened my culinary skills.

Q: Your boss managed you well.

A: He has always been very nice with me. He was not like that with everybody. When my apprenticeship ended, I accomplished my military service. One month before I ended my service in the army I went to see him he recommended me to a chef in a restaurant called La Rotonde in Anglet, more precisely “La Chambre d’Amour”. In winter, we were specialized in baby eels called “pibales”, the Chef was Gaby Bidegain he was an alumni of the hotel where I used to work. He was specialized in classic dishes like Pot au feu, la poule farcie, codfish, boeuf Bourguignon.

Q: Who is the person who really inspired you and is behind your career decision?

A: My dad was in the army, he was Food and Beverage Manager when he retired from the army he worked in a retirement home in Cambo les Bains where he was occupying similar functions. I have always heard him talking about cuisine, food markets, I have accompanied him when he was shopping, and I have always hanged out in kitchens somewhere since my younger age.

Q: Who is the Chef who has the most impressed you?

A: Like many people or Chefs, for me it’s Paul Bocuse.

Q: Have you visited his restaurant?

A: No never, but he came to the Café de Paris in Biarritz where I was working under Pierre Laporte. I shook Paul Boscuse’s hand and I cooked for him and Roger Vergé.

Q: A two star Michelin restaurant. What was the occasion?

A: Paul Bocuse and Roger Vergé were having a course of thalassotherapy and they came to dine with their spouses. For that occasion, I grilled an 8 kg Turbot.

Q: What is inspiring you with Paul Bocuse?

A: He has done so much for the cuisine and the “cuisiniers”. We are no longer locked in basement cuisines. His philosophy and professional ethic have had an impact on the drastic changes in our profession.

Q: Are you referring to the Bocuse d’Or?

A: Not necessarily, this is mostly in general. Him and some others before him, I am thinking about Fernand Point. But Bocuse is such a mediated persona. I read about him, I watch shows about him; he has the gift of ubiquity. This is a person I would have liked to work for.

I had a Chef’s hat signed by him and Roger Vergé but with the time it got erased. We had a photo shoot with them during which Paul Bocuse could not stop moving, laughing and talking to everyone, setting an ambience, such as the photographer said; “Paul can you stop that”.

Q: Is there a time during your career you have been discouraged, to the point of giving it up?

A: To do what? … Well there have been places.. I am thinking about a place where there were things happening that I can’t describe it was not in my work ethic.

Q: How did you come to San Diego?

A: I wanted to come to the US and I did, within two weeks I found a job.

Q; what is your best souvenir in the cuisine?

A: To have cooked for Paul Bocuse. And in term of bad souvenirs, I do not have a bad souvenir. I live my profession on a daily base. However what is really acting on me it’s the stress, it’s every day.

I never know, to follow a French expression, “at what sauce we are going to be eaten”. Every service is different and that is since my younger age working as a professional cook. You never know how it is going to happen. I am worrisome about it. Still and always.

Q: Tell us more about your chef’s habits or the way you are working?

A: I have never worked in kitchens where we were writing what we were going to do the day after, the “mise en place”, the specials.

Never in writing all in oral communications.

The cuisine, I agree, it’s definitely about recipes but I always make my own interpretation. It’s not specifically the recipe from the book. The interpretation of recipes is very personal while respecting the rules, the main idea and the technique.

Q: What would you say to conclude?

A: In culinary fields, there is not much secrets. It does not serve to know things if you do not share.

Thank you for your time and for sharing all this with us.

This interview occurred a week prior Paul Boscuse’s passing.