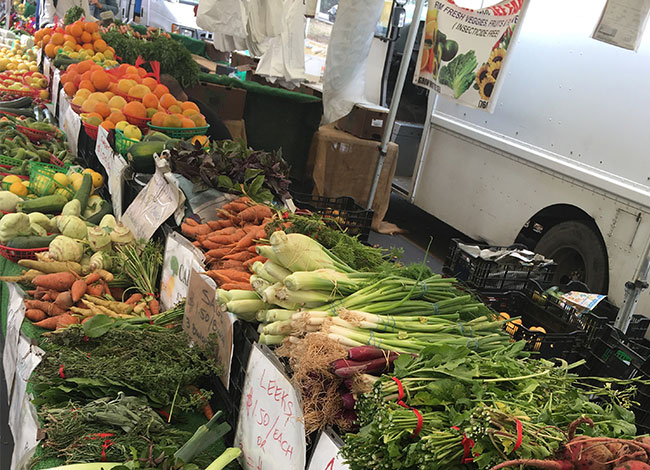 Suzie’s Farm has a significant presence at the Open Aire Farmer’s Market, held at the Elementary School in La Jolla. They are also a common fixture of many farmers’ markets all around San Diego, and are a significant part of the San Diego community. Sylvie and Carla Diot of Bistro du Marché sat down with Samuel Ramirez, Grace Kinney, and Fay Fernandez of Suzie’s Farm to get to know more about the farm and their services.

This interview has been edited for clarity.

Sylvie: What is the main focus of Suzie’s Farm?

Samuel: We have a really small flock of 500 chickens. We have eggs that are limited for sale in farmer’s markets. Part of the chicken’s rotation is to fertilize the soil and remove weeds through the rotation of a pasture.

We mainly specialize in salads, greens that we produce year round. We grow salad heads and also in customized salad mixes, pre-washed for restaurants and for farmer’s markets. Additionally, we specialize in spinach and a few oriental seasonal salad greens, including tatsoi and Napa cabbage.

Sylvie: What makes the location of Suzie’s Farm special?

Sylvie: Is there one product that you grow around the year despite seasons?

Samuel: We grow a lot of different varieties. A popular one is the twenty-five day-lettuce, as it has a really short harvest period. If we wait too long, they lost tenderness and can start to produce seeds. It is risky when grown in large production as there are unknown variables. We don’t know how many of those lettuces we’re going to sell unless they have already been sold. When growing risky things like lettuce that takes thirty-five to forty days, we end up sitting on money. Usually, having smaller heads of lettuce helps to go through some of the farmer’s difficulties with this produce.

Sylvie: Do you ever run the risk of losing crops?
Fay: Yes! For example, rabbits with our carrots.

Samuel: It’s always a risk. Recently, coyotes ate our lettuce heads, but other times, it might be bugs. It’s really risky.
Fay: A lot of environmental difficulties.

Samuel: Although, due to the marine influence, we are able to grow a lot of a cool season crops year round, which is what makes greens very valuable for us. We do provide at least a few lettuce mixes year round.

Fay: We do grow arugula year round.

Samuel: We grow it, but it takes a while. We go through plantings, but when the weather is off, crops will completely dislike it and go straight to flowering.
Fay: The weather has a lot to do with it now. We must adjust the harvest.

Sylvie: Your farm is a seven day, twenty-four hour operation?

Fay: For the workers, they show up really early and have a ten-hour day of harvest. They start on Sundays which is the beginning of the week.
Sylvie: How did you land in this business and farming?

Samuel: I went on a search to find what I really wanted to do in life. I had to quit my job as a cook to try to become an artist. I tried to focus more on my art with my education and ended up following what I wanted to do, which was my dream, working on the film.

Sylvie: What is your background?

Samuel: Films and pictures. It’s what I really liked. It started with skateboarding, which is something that I went on to film with video cameras.

Sylvie: How did you put one foot in farming? Had you worked on a farm before?

Samuel: Are you guys ready? Brace yourselves. I became part of a community garden in San Diego. After my girlfriend and I went traveling, we went to a commune in northern California. There were 86 acres in the middle of the forest, and it was like a detox from life. We did everything communally, and everything we did was community-based. We had communal meals, and we had a really good adventure and experience about how to live on the land next to nature, like bears and mountain lions. It really opened our eyes. When we came back, my girlfriend decided to look for a garden and ended up living next door to a community garden. She found a place that a gentleman was looking to leave but needed help to tend to it in the meantime. There was a two-year waiting list and when our name came up, we took over that garden. A couple of years later, with the help of friends, we built up the idea to start a food business.

Sylvie: What type of food business?

Samuel: Using the products that we grew, which were local fresh ingredients to make food. We got on this rotation and I started to learn how to farm. We were really trying to follow the idea of creating food justice in the community. There were a lot of greasy food options, and not a lot of healthy food options, and this is where the story takes a turn. I met a guy who was growing oyster mushrooms in a greenhouse on the farm that I am currently working for. At the time, I was trying to work my food business, and it wasn’t really going the way I wanted it to go. I visualized a connection between us, where he would provide mushrooms for me, and I would use them in my food. He started teaching me beekeeping and eventually went into livestock. He wanted to open up his own farm, and I wanted to help. Later, he went through some emotional issues. He went his own way, and I did my own things with the knowledge that I had learned from him. I stopped doing my food business, and decided to dedicate my life to farming. He introduced me to the owners of Suzie’s Farm. They needed somebody for an educational program for 2 kids, and I wanted to teach. They had a position opening for a farm stand.

Sylvie: How many years have you been in farming?

Samuel: About eight years. I’m a representative of Suzie’s Farm. So are Fay, and Grace. We represent the farm at the farmer’s markets and events, and we also host tours at the farm.

Sylvie: How many employees are there at the farm?
Fay: There are about one-hundred employees in between administrative, field workers, tractor drivers, and maintenance. We are a very small family farm. We love it there! It’s like family, it’s wonderful. Come down! I would love to tour you.

Sylvie: Absolutely! What are the typical functions of a farmer preparing to go to a market?

Samuel: We don’t do any of the harvesting ourselves. All the products for today’s market were harvested the same week, between Thursday and Friday. It’s usually a range of what comes out of the week and what remains from restaurant sales and other markets that we sell to. Usually, everything is already pre-packaged for me. It starts at 5:30am this morning, if not earlier.

Sylvie: Is this when you discover the inventory of products that you are going to sell?

Samuel: Someone pre-selects it for us. It’s packaged, we pick it up, and we load it and make sure that we have everything.

Fay: We head off to make it by a certain time to unload the products and set them up at the farmer’s market. That’s pretty much our morning routine.

Samuel: Hopefully, we don’t come back with anything and so we don’t have to load anything.

Carla: Is there anything where you look at the ingredients that you’re making that inspire any recipes out of you?

Fay: I make all kinds of different things. I just throw it all together. The produce is just so beautiful and it’s delicious. I just let it talk to me, it’s very inspiring. I’m always cooking with our farm products.

Grace: You can do lots with it. You can turn it into anything really.

Carla: It probably helps you sell the produce as well, as you can discuss it thoroughly.

Fay: I am also part of the farm tour team, and I enjoy sharing my experiences with our products.

Samuel: It’s kind of part of the job.

Fay: Like, this is your beautiful bouquet, it’s beautiful at the farm, it’s right there, and it’s so simple.
Samuel: But the easiest thing that I found with vegetables, is that you want to eat them really quick. The moment that you feel like eating them, you have to do it. Otherwise, you will put them away, and it’s going to rot.

Fay: For example, I didn’t know about fennel until I started working for Suzie’s, and then I cooked the fennel and was like “Oh my gosh, I love it! This is such a good snack!”

Carla: I know one of our favorite things to do at home is to pick up a bouquet of radishes, and just snack on them.

Fay: What I do on the tours, while I teach people to harvest is to snack on peas, turnips, carrots, everything that we have to offer.

Sylvie: When do you hold tours?

Fay: We do 90-minute tours on Tuesdays starting at 3:30pm, and on Saturdays starting at 10am and 12:30pm. Tours are on foot, and it’s so nice and peaceful. Everyone is usually like “Oh my goodness, I’m so glad I came out here.” It’s so peaceful, it really is. There’s something about being at the farm.

Carla: Does Suzie’s Farm do anything in regards to outreach?

Samuel: We have our farm stands and we have events year-round. We are in the middle of one now called the Strawberry Jam. There are not a lot of strawberries available, but we do have a big scene around that. We also bring in live music along with some few local organizations or vendors. We’re a community-oriented farm, the community is one of the most important things to us.

Sylvie: Are you attending a market almost every day, so we can find you in the week?

Fay: Except for Monday and Friday.

Sylvie: Thank you for your lesson on sustainable living. This is a great one to expand on. See you soon!